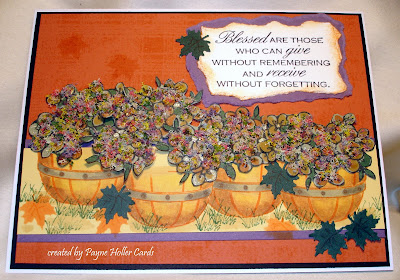 This card is sooooo much prettier in person :). What doesnt show is the gold glitter all through the flower soft. I used two different sets from GinaK for the baskets and flowers. The flowers were stamped onto mellow moss, copic colored and gold glitter pen to centers of flowers and randomly throughout the flowers. Then they were cut out and the flower soft was added. Set them aside to dry.

The background is stamped with a SU Jumbo wheel (don't know its name). The negative left from the green cardstock that I punched the leaves out of...was used as a stencil for the pumpkin colored leaves (didnt want to fill the card too much with punched leaves).

The bottom of the baskets were stamped on Saffron cardstock, masked to get 4 baskets and colored with copics. Matted them onto pale plum - different color combo - I like it!

The sentiment's edge was brushed with pumpkin and matted onto pale plum.

Now the flowers were added - some are raised for dimension and some adhered flat to card.

Wish the picture did it justice!!

TIP: with Flower Soft, I use Scotch Brand Quick Dry Tacky Adhesive (cheap, dries quick and clear and really does tack up immediately). If no one told you when you purchased Flower Soft, it is best to put it into a little larger container. Fluff it up with your piercing tool - you will be amazed how much is in that little jar. (I actually shake mine to loosen it up) Dot your area with the tacky adhesive where you want the flower soft and sprinkle it on. Having it in a larger container lets you pinch some with your fingers to sprinkle. Do this over paper. When the glue has dried, tap your card (its even ok to use a very soft brush to brush over it) - this will let all the loose flower soft drop on the paper. If you want to add glitter, you can color image with glitter pen, add loose glitter to tacky glue when sprinkling the flower soft or dot with good ole Stickles!

Hope everyone is having an enjoyable 3 day weekend, LOL

Posted by Payne Holler Cards at 6:30 AM

Love your cards.......blog........ So totally beautiful. I can see I will definitely get inspired by your creations. DIVAS

OOOOH Linda, this is gorgeous!!!!

Wow, Linda! It looks like I could reach in and pick a flower! Beautiful work!

Linda your card is stunning! I love how you used flower soft and glitter on the flowers - very pretty!

What a beautiful card Linda! Those flowers are just gorgeous...tfs!!!

this is fantastic! Like I said over at ST, lots of work but man the outcome is gorgeous!

This is absolutely gorgeous!!

Beautiful job Linda! WOW - I can't imagine how much MORE gorgeous this is in person b/c it's outstanding here on my laptop!!
Maria

Wow! Linda is is beautiful. You are an amazing artist. I just love looking at all your creations.

Linda, this is absolutely beautiful!! Great coloring!!! I love it!!

Wow, I love looking at your flower soft card....but for the life of me I can't make one I like!! Beautiful card! :)

Beautiful Linda! Thanks for the great tips on using Flower Soft... your flowers just pop right off the card!

Oh this is gorgeous! I love all the details and you can really see them if you blow up the picture. Love the colors, you just did a great job on everything.

oh...i love this flower soft stuff! i just got a new stamp from them...but didnt know i needed the ez mount.. :-( thanks for asking about my friend....i appreciate it...he does too...

Because He Lives! Singer unknown

I DESIGN FOR THE 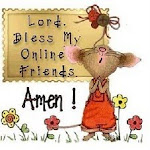 thrilled to have been featured

Payne Holler Cards
Fredericksburg, Virginia
Hi there, love getting to know you and sharing this crazy passion for creating! I'm a born again Christian who along with my husband came to the Lord later in life and so very thankful for our salvation! we have two grown daughters and two loving SIL's and five grandchildren!! we are very blessed indeed, hugs and blessings ...Linda

Some Cards Categorized for you

All designs are created by Payne Holler. My original artwork is for your enjoyment only and may not be copied to be used for publication, sale or contest submission. Copying for your own personal use is permitted (and the reason for this blog). I hope you are finding it useful. Have a blessed day, Linda

Challenge Verse for me

Philippians 2:14 "do all things without murmuring and disputing" ...I have been trying to do this for a long time, it's a challenge :)